To arrange for an interview with any of the performers or producer Ken Henderson, please contact Ken Henderson at 415-264-0926. ​ 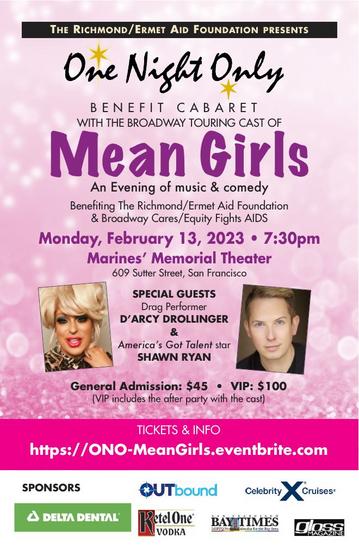 Shawn Ryan’s career got it’s first launch when he was a Semi Finalist on NBC's America's Got Talent and has been seen in numerous television appearances including Famous in Love, Bones, The Mentalist, Life, One Night Stand Up, and Women's Murder Club where he landed the role of Karen Adams, a Drag King with narcolepsy, all thanks to Jane Lynch turning down the role. (You can't make this stuff up). Shawn is also the co-founder of The Young Actors’ Theatre Camp along with John Ainsworth.

D'Arcy Drollinger is an actor, writer, director, choreographer, producer and entrepreneur. Drollinger has written over a dozen original works, including: Bitch Slap, and Sh*t & Champagne. His first feature film, an adaptation of Sh*t & Champagne, was released in 2020 and is now available on Hulu. D’Arcy is the owner and artistic director of Oasis, voted San Francisco’s best nightclub/cabaret. Drollinger is the executive director of nonprofit Oasis Arts, dedicated to providing access and resources to LGBTQIA+ performing artists. Other credits include first Broadway Productions: The Producers and Hairspray the Musical. D’Arcy is the creator of Sexitude™, the body-positive, age-positive, sex-positive dance experience based in San Francisco.