The Countess Katya Smirnoff-Skyy has enthralled Bay area audiences for years with her unique blend of opera pop and booze. With a career spanning ...a very, very long time.....Katya claims to have invented Popera, romanced William Shatner, and lived next to John Lennon at the Dakota during her stint in New York City during the 1970's. Once Eastern Europe’s greatest Mezzo-Soprano...understudy, the Countess now spends her days beautifying the masses at Macy's Department store, as everyone’s favorite Chanel counter lady. She spends her evenings crooning and drinking her away through the finer theaters, bars and bath houses of America. 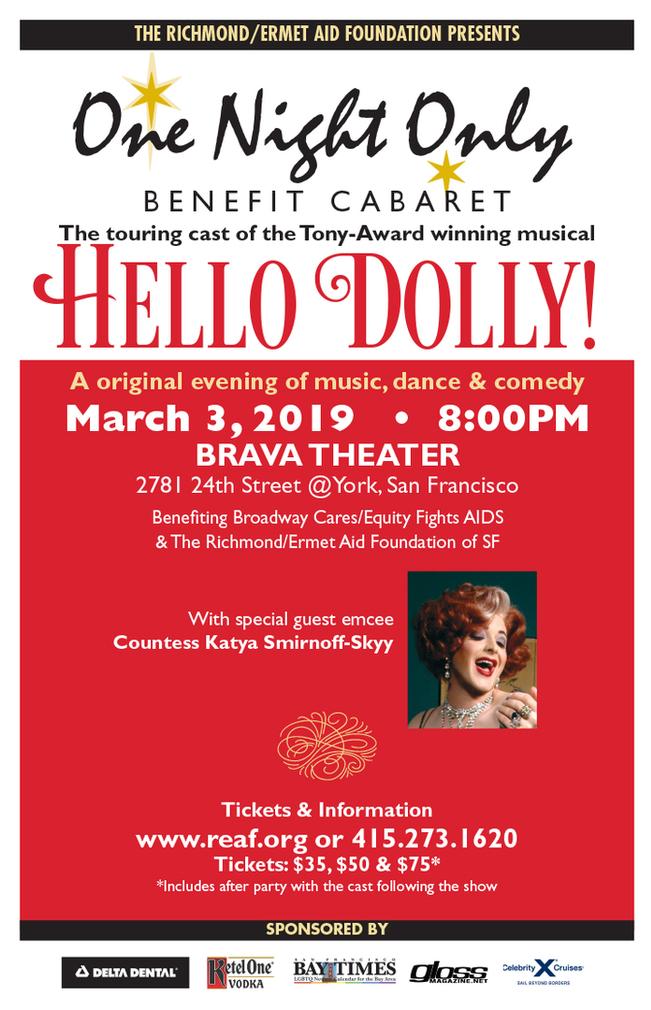 *$75 tickets include the after party with the cast following the show.

The touring cast of ‘Hello, Dolly!” has been traveling around the country to rave reviews! The Chicago Tribune called it, “the only ‘Hello, Dolly!" you’ll ever need to see”. The “superb cast” is thrilled to be in San Francisco to show off their talents and raise money for a cause they’re so passionate about.
Together they’re bringing a spectacular night of song and dance, fun and feelings. Fan favorites include Nic Rouleau, who performed as Elder Price in the Broadway, London, and National Tour companies of 'Book of Mormon', and Jess LeProtto, best known for SYTYCD and his 8 Broadway shows including ‘Newsies’!
Broadway must be feeling pretty empty, because Analisa Leaming comes straight from playing Rosalie in ‘School of Rock’ and was also seen as Anna in ‘The King and I’. Kristin Hahn was Phoebe in ‘A Gentleman’s Guide to Love and Murder’ (also on the tour here in SF) and Garett Hawe has been dancing all over Broadway (another Newsie!) most recently in Carousel.
Other Broadway notables include our last Newsie Julian DeGuzman who was in ‘Miss Saigon’, Corey Hummerston who cracked us up in ‘Book of Mormon’ and Beth Kirkpatrick who stormed the barricade in 'Les Miserables’. Timothy Shew holds the record with his 11 Broadway shows, including hundreds as Jean Val Jean himself.
Many other cast members have toured around the country and are so excited to be back here! You might have seen Maddy Apple in ‘White Christmas’ here in SF, Daniel Beeman in 'Something Rotten!’, “Brittany Bohn and Ben Lanham in ‘An American in Paris’, Maria Cristina Slye in ‘Elf’, or Elizabeth Broadhurst in ‘Annie”.
And that’s just the beginning! All of your favorites will be bringing brand new jams and classic Broadway hits, so come with your heart and wallet open for an incredible evening!